March 18, 2019
The round table was held in the Analytical center for the Government of the Russian Federation. It gathered government delegates, experts, heads and representatives of Russian science and industry to discuss the problems of the Digital economy in Russia. The primary attention of debating was focusing on the national market of telecommunications equipment and the current state of competition in the national marketplace and abroad.
Experts were analyzing technical specifications and market prices of Russian and foreign equipment. Commercial taxation, crediting and logistics were fruitfully discussed. 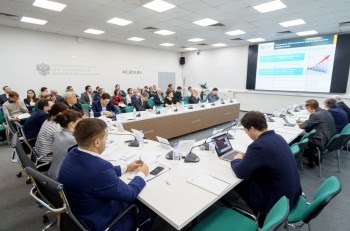 The government programs aim to advance new generation Cellular networks, Wi-Fi networks and Sensor networks based on domestic equipment. Evgeny Khorov noted that for developing competitive technologies, more investment should be made in high-level research. Russian industry will not be able to develop competitive local 5G equipment, as well as new Wi-Fi (namely 802.11ax and  802.11be) and Wireless Internet of Things devices alone without interaction with international research groups and consortiums and also without participation in international standardization committees.
‘We can hardly count few Russian companies which participated in IEEE 802.11 last years. Ignoring leading experts in the telecommunication field, the goal to make devices internationally competitive seems unrealistic. The Russian industry must realize the crucial necessity for a turn to the world experience instead of thrust to non-market, protectionist measures’, summed up Evgeny Khorov.
The round table speakers also remarked that the Government Digital Economy program could help the Russian industry to reduce outgoings and other expenses to set competitive prices of domestically sourced equipment. The experts also suggested improving tax and customs systems.
Wireless Networks Lab is a ‘Megagrant’ lab established in 2017 around the project on Cloudified Wireless Networks for 5G and beyond, led by Prof. Ian F. Akyildiz. The team regularly reports at leading IEEE conferences, runs industrial projects and contributes to standardization of wireless networks.