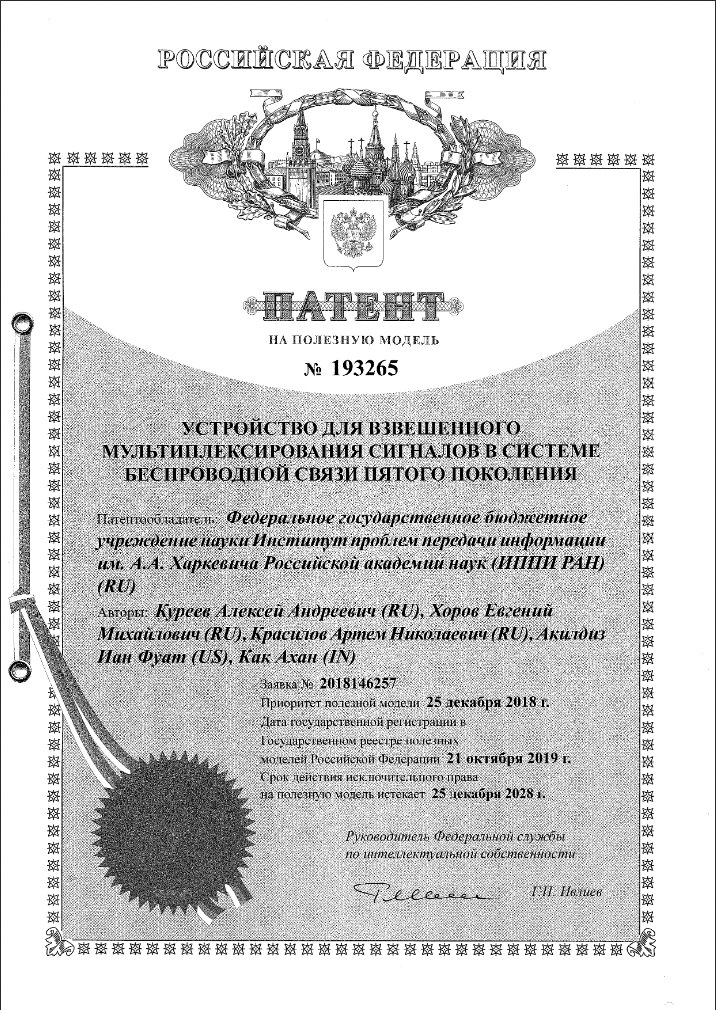 WNL lab has registered a patent on AirHype, a Wireless Hypervisor for 5G technology.  AirHYPE is a part of a novel Architecture for 5G Systems (ARBAT) which was presented by WNL members I.F. Akyildiz, A. Kak, E. Khorov, A. Krasilov, and A. Kureev in the paper, called ‘ARBAT: A Flexible Network Architecture for QoE-aware Communications in 5G Systems’ published in December 2018 in Computer Networks. The aforementioned network architecture is characterized by many innovative features including the multislice modular resource management with the new patented AirHYPE wireless hypervisor.

The invention is ensured to provide flexibility and Radio Access Technology (RAT)  agnostic operation by placing AirHYPE between the lower physical layer and RF front-end, to make use of the existing signaling framework provided by eCPRI (evolved Common Public Radio Interface), thus eschewing the need for extra control overhead. AirHYPE enables low-level resource planning for data transfer in a highly reliable and low latency manner. In the case when several base stations are connected to the same radio module and two streams collide (both base stations planned to transmit data at the same time), AirHYPE allows to select the stream with the highest priority or combine these streams using non-orthogonal multiple access. Moreover, AirHYPE takes advantage of the bit synchronous interface of the eCPRI link and does not require any additional synchronization. Further, it does not require any modification to the physical layer and follows a plug-and-play approach.

“We believe that AirHYPE will become a key technology for Ultra-Reliable Low Latency Communications in 5G. It opens new time-critical scenarios related to autonomous vehicles and factories with smart sensors for usage in new cellular networks”, said Alexey Kureev.

Wireless Networks Lab is a Megagrant lab established in 2017 around the project on Cloudified Wireless Networks for 5G and beyond, led by Prof. Ian F. Akyildiz. The team regularly reports at leading IEEE conferences, runs industrial projects and contributes to standardization of wireless networks.